"If your kinsman, being in straits, comes under your authority and you hold him
as though a resident alien, let him live by your side..." -- Leviticus 25:35

Served by JFNA, Federations and their affiliated agencies assist thousands of refugees and legal immigrants every day.

In the last 25 years, Federations and the Jewish community’s migration arm, the Hebrew Immigrant Aid Society, have supported the resettlement of 400,000 Jews from the former Soviet Union who were admitted to the U.S. through the Refugee Act of 1980, the Lautenberg Amendment and other refugee programs. Federations continue to fulfill the second phase of resettlement, helping new immigrants integrate into American society.

Working with the North American Federations, the National Conference on Soviet Jewry has been an effective frontline advocate for human rights and unrestricted emigration for Jews from the former Soviet Union.

The Federations of North America, through their support of the Jewish Agency for Israel, brought 78,000 immigrants to Israel in 1999; 67,000 from the former Soviet Union. 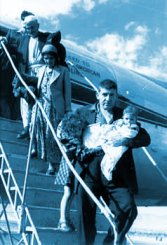